Thank you to all teams that participated in our World Cup event this year! 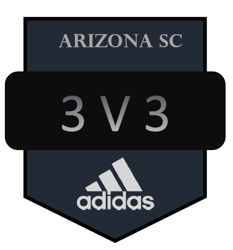 Arizona Soccer Club is excited to host yet another World Cup 3V3 Tournament!

This event is a great way to celebrate soccer and be able to represent your favorite country in our event.

Each team will play guaranteed 3 games in a tournament format.

This league is open to all players from all clubs.

Dates: April 19th and 20th (Friday and Sunday). No games on Easter Sunday!

Every team is required to have a designated team manager that is the point of contact for all league communications and the manager should pay and register the team online.

The manager will need to create a new Got Soccer account for the team. Do not use your current club team account.

During registration you will be asked for your;

CHECK IN: Teams will check in at their first game with the referee.

EQUIPMENT: All players must wear shin guards. Any player without shin guards will not be allowed to play. Teams are responsible for providing game balls.

GAME DURATION: The game shall consist of two 15 minute halves separated by a two minute halftime, OR the game ends when a team reaches a 10 goal lead. Pool games tied after regulation play shall end in a tie. Playoff games cannot end tied.

PLAYOFF OVERTIME: TEAMS WILL HAVE A 3 MINUTE “GOLDEN GOAL” OVERTIME PERIOD. If the score is still tied, the winner is  decided by shootout with the 3 players on the field at end of golden goal period.

GOAL SCORING: A goal may be scored from a touch on the offensive half on the playing field.

FIVE YARD RULE: In all dead ball situations, defending players must stand five yards away from the ball. If the defensive player's goal area is closer than five yards, the ball is placed five yards from the goal area in line with the place of the penalty.

KICK-INS: The ball shall be kicked in to play from the sideline instead of thrown in.

GOAL KICKS: May be taken from any point on the end line, and not in the goal box area.

KICK OFF: May be taken in any direction.

PENALTY KICKS: Shall be awarded if, in the referee's opinion, a scoring opportunity was nullified by the infraction. It is a direct kick taken from the top of the center circle (15ft. line) on the offensive side of the midfield line with all other players behind the midfield line. If a goal is not scored, the defense obtains possession with a goal kick. Penalty kicks are not live balls.